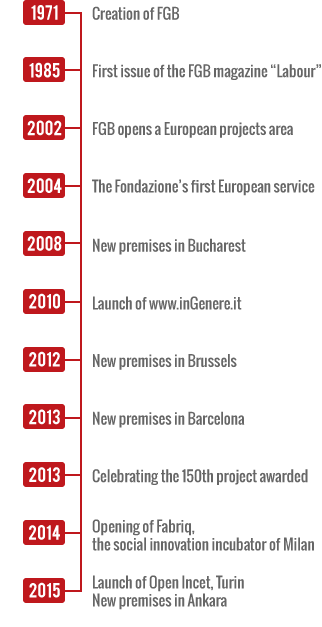 Along with the long-term running journal Economia e Lavoro, ‘Labour’ is issued in collaboration with CEIS - University of Rome Torvergata; the quarterly magazine, published by Wiley-Blackwell, Oxford, ranges from economic and legal issues related to the labour market, to the study of national and international industrial relations.

Prof. Annamaria Simonazzi and Prof. Giuseppe Ciccarone bring the activities of FGB to the European level. Alongside its extensive research experience, a new working team of young professionals develops a projects area.

’Poverty and social exclusion among lone-parent household’ represents the Fondazione’s first European service, which will open the way to important projects of network management such as EGGE, EGGSI and then ENEGE and WEESP. FGB proves to be a renowned knowledge broker in the area of policy analysis, consultancy and impact assessment.

By establishing an office in Bucharest, FGB assumes a leading role in Romania’s ESF strategic projects. Will then provide technical assistance services to the Ministry of European Funds for the negotiation of the EU structural funds 2014-2020 programming period.

Launch of www.inGenere.it a web magazine with a focus on economics and society from a gender perspective, the first of its kind in Europe.

Fondazione lands at the heart of Europe opening new premises in Brussels. One year later FGB is awarded from DG EMPL its first frameworks contract for the provision of impact assessments and other research-related activities

Through the acquisition a branch of the former CIREM Foundation in Spain and the opening of a new premise in Barcelona, FGB expands its activities to the Mediterranean

Opening of Fabriq, the social innovation incubator of the Municipality of Milan managed by FGB. It represents a landmark in the developement of FGB into a Think-to-do Thank